Can Our Farmers Save Our Health? – With Jeff Tkach

“Soil Is A Miracle”

This episode is about regenerative agriculture and the root cause of why so many of us have a mineral deficiency. Well, the answers lie in what is happening to our soil.

Jeff Tkach serves as the chief impact officer for the Rodale Institute. Basically, he is responsible for expanding the institute’s global influence in healing people and the planet by unlocking the transformational power of regenerative organic agriculture.

In this podcast, Can Our Farmers Save Our Health, we cover: 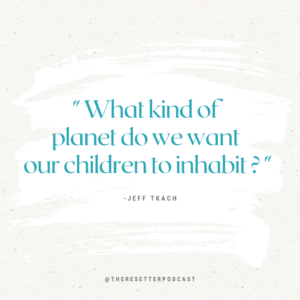 Waking Up To Our Soil Problems

2020 and 2021 are waking everybody up to the topic of soil. The global pandemic has exposed a lot of frailties to our nation’s food and agricultural systems. Do you remember going to the grocery stores last spring? You walked into stores with bare shelves and not much to choose from. Frankly, we have been trusting too heavily on the reliance of an international supply chain. In 2019, 17% of all the food that we ate was imported from other countries. With the pandemic, people are concerned about their health and their immune systems. In fact, we planted 22 million gardens in 2020!

Are We Really Being Nourished?

Conventional farming practices can damage the production of minerals and nutrients that we assume are in our vegetables. However, people are starting to understand that many necessary minerals and nutrients are not actually in our fruits and vegetables through scientific experiments. Our food should genuinely contribute to the health of humans. Unfortunately, when we use pesticides and herbicides, it will derogate the soil. Scientifically, you can kill life in the soil by how you manage it. Kiss The Ground did a great job in showing the difference between conventional farming and regenerative farming. Overall, if you haven’t already, we definitely recommend checking the movie out.

Consumers Are To Blame For Poor Soil

Consumers are the ones who are demanding cheap food. In 1960, we were spending more money on food than healthcare. Now, we are spending more on healthcare than we are on food. Food is artificially cheap. Basically, we are paying the insurance companies and doctor’s offices instead of our local farmers. Luckily, farmers don’t wake up every morning and ask how they can make people sick. Farmers are good-hearted people. However, people told our farmers that we want cheap food. In order to deliver inexpensive food, they focus all their efforts and energy on yield.

Without farms, we don’t have a community. Rodale Institute has a program where they grow food and truck it to city centers once a week. Low income, low access families can walk to the mobile market and use double SNAP points. For $15 – $30 a week, they feed families with fresh and organic foods. Why can’t we create these models all over the United States? Contact your policymakers and ask them to build a program like that. If you want more information, you can contact the Rodale Institute.

Pay Attention To How You Shop

If you have a backyard, then you have a responsibility to grow something. It takes a more disciplined approach to buy food. Luckily, this can be an optimistic discipline. Have conversations with farmers and people in your community. Eating can be a revolutionary act. Make sociological changes by choosing where you put your food dollars. We can create localized food companies and become less reliant on big agriculture. Shift your food dollars to local grocery chains rather than Whole Foods. In general, invest your money with local people rather than Amazon. That way, big food companies will have to change the way they grow and sell food.

The Solution Is Regenerative Agriculture

It takes 1,000 years for nature to generate one centimeter of soil. On regenerative farms, we can grow soil organic matter in a few years. Soils are becoming more degraded every year. The solution is right under our feet: it’s called regenerative agriculture. Hopefully, we start to embrace regenerative agriculture. Generally, it would be a much better planet to live on when we do this. When we understand that soil has a critical element of our health, our entire lives will change.

Look For The Regenerative Organic Certification

Jeff Tkach: [00:00:00] If we really want to become a healthier society, we need to. Spend more time giving care to where our food comes from and how it’s produced. I am a woman on a mission that is dedicated to teaching you just how powerful your body was built to be. I like to do that by bringing you the latest science, the greatest thought leaders and applicable steps that help you tap into your own internal healing power.

Ask Me Anything Keto & Fasting – With Ben Azadi

Insulin: Everything You Need To Know – With Dr. Ben Bikman

The Role of the Gut Microbiome in Human Health – With Dr. Will Bulsiewicz